Feel invited to dive into the beautiful marine world of Lucky Fish!

Dive in and explore what’s hidden in the depths of the ocean with the friendliest bunch of fish that are waiting to share their treasures with you!

The action of this 5-reel slot equipped with 243 ways to win takes place deep underwater. The gameplay is based on its Cascading Reels feature – drawing a winning combination makes the winning symbols pop and disappear and icons from above take their place to enable completing new winning paylines. Each consecutive win increases the win multiplier by 1 to up to x5 and the symbols continue to pop as long as new wins occur. The friendly goldfish can award you random Wilds on a non-winning spin to help you turn your fortune and form as many winning betlines as possible. And there’s still more Lucky Fish has to offer! Take advantage of its Free Spins feature and get 10, 20 or even up to 30 Free Spins for landing a set of 3, 4 or 5 Scatter Symbols respectively and you will get the chance to win big in no time! A draw of a minimum of 3 clam icons triggers the Mystery Bonus that awards an instant cash prize – up to 1,000x stake!

Lucky Fish is also equipped with a full set of Unique Wazdan Features that allow you to tailor the gameplay to your preferences. Toggle the Volatility Levels™ any time you want during your play and adjust the amount and frequency of your wins, use its Ultra Lite Mode when you suffer from slow internet connection, zoom in the reels with the help of Big Screen Mode and modify the slot’s game speed with Ultra Fast Mode and win in the blink of an eye! 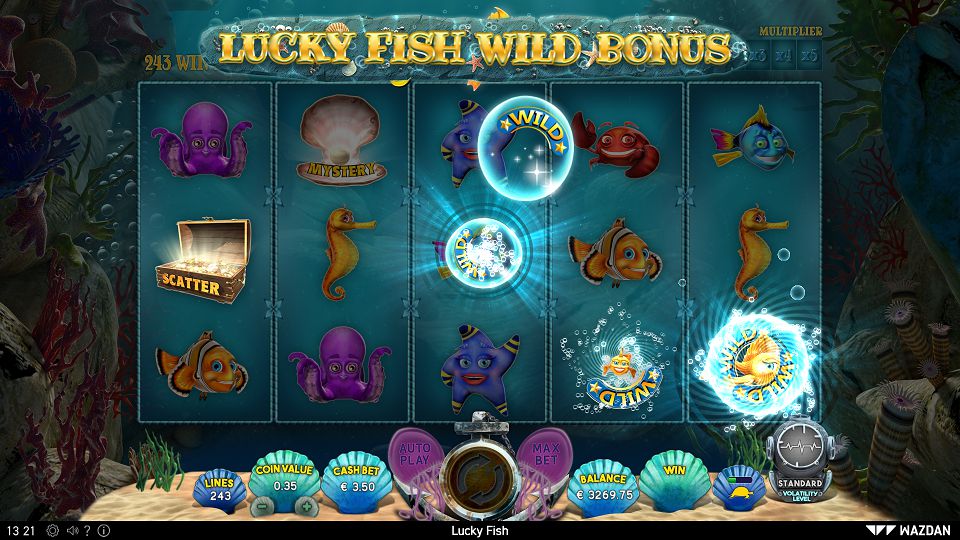 The friendly little goldfish can be very generous! Once it lands and doesn’t contribute to a win, it can randomly form four bubbles that float on the reels and land on other symbols which then turn into Wilds to let players reach big cash prizes. 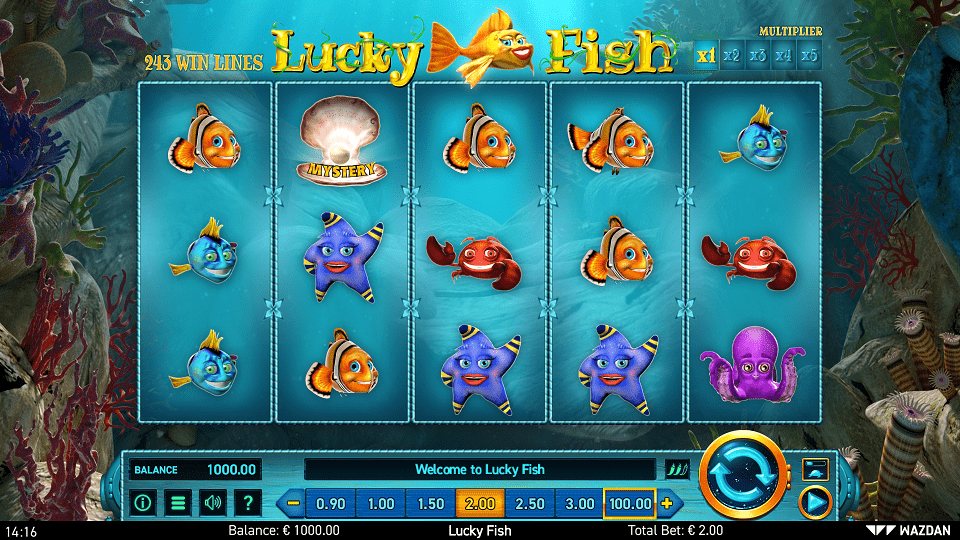 In the depths of the blue ocean, friendly creatures are waiting on the reels of to bring luck to the players – who will find a hidden treasure? 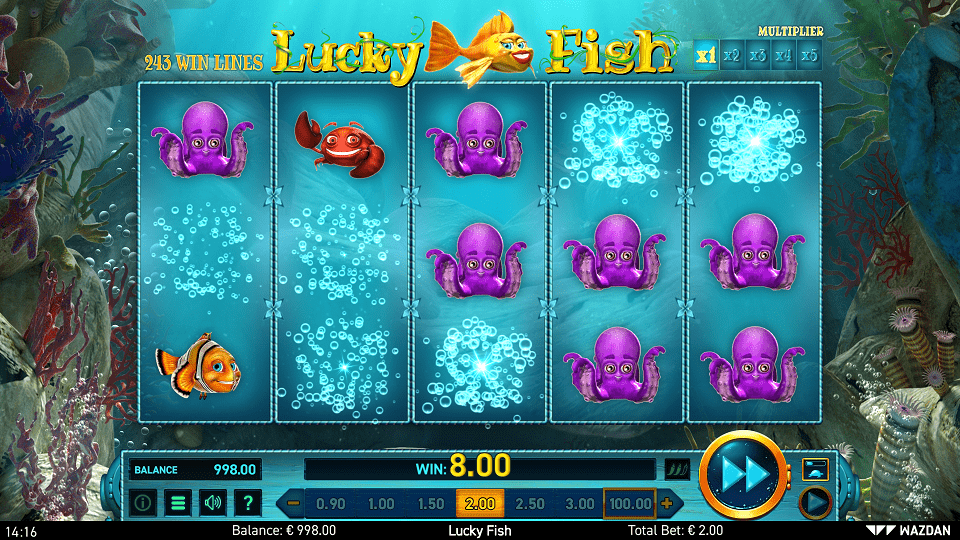 After each win, the symbols that contributed to a win disappear and symbols from above take their place to give a chance to form new winning combinations. After each consecutive win, the win multiplier increases until it reaches x5! The feature is active until there are no wins. 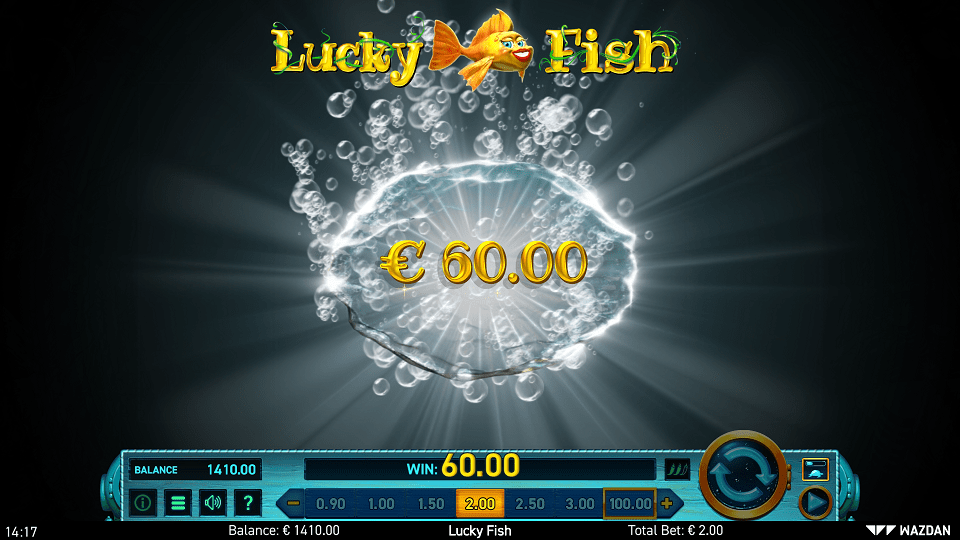 The clam icon represents a Mystery Symbol that can shower players with riches as soon as at least three of them appear anywhere on the reels. The value of the Mystery Bonus depends on the number of the symbols that activated the feature and it can pay up to 1,000x stake! 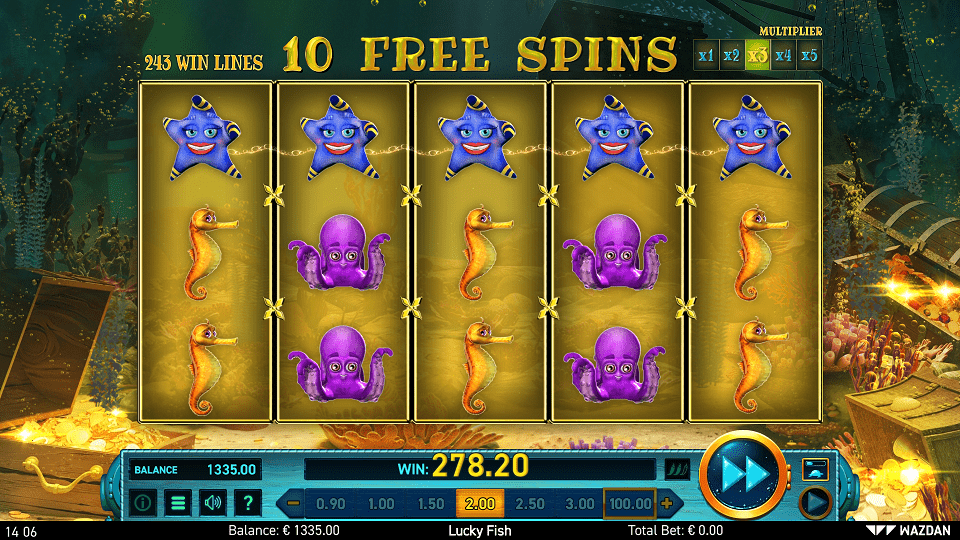 The treasure chest icon represents the online slot’s Scatter Symbol. It doesn’t have a value, however, once at least three of them appear anywhere on the reels, it triggers Free Spins! A draw of 3, 4 or 5 Scatter Symbols grants 10, 20 or even 30 Free Spins. 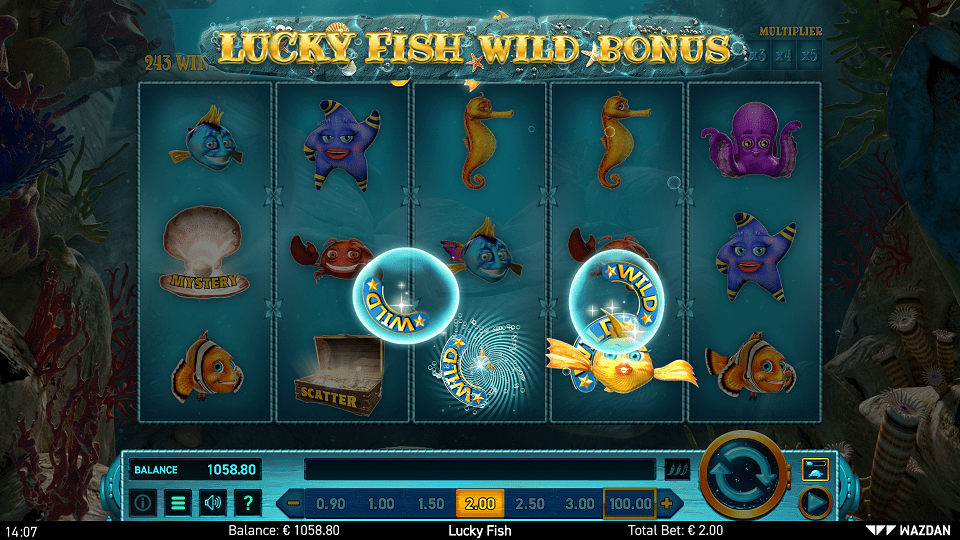 The goldfish brings players loads of luck – the friendly animal is here to help players grab some extra cash by substituting for all other symbols aside from the Mystery and Scatter Symbols. The Wild Symbol doesn’t create its own winning combinations. 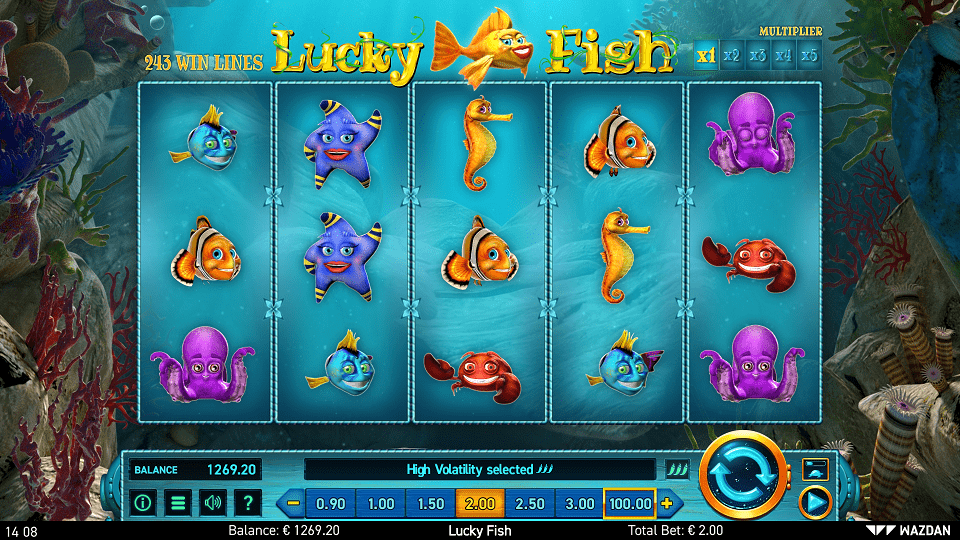 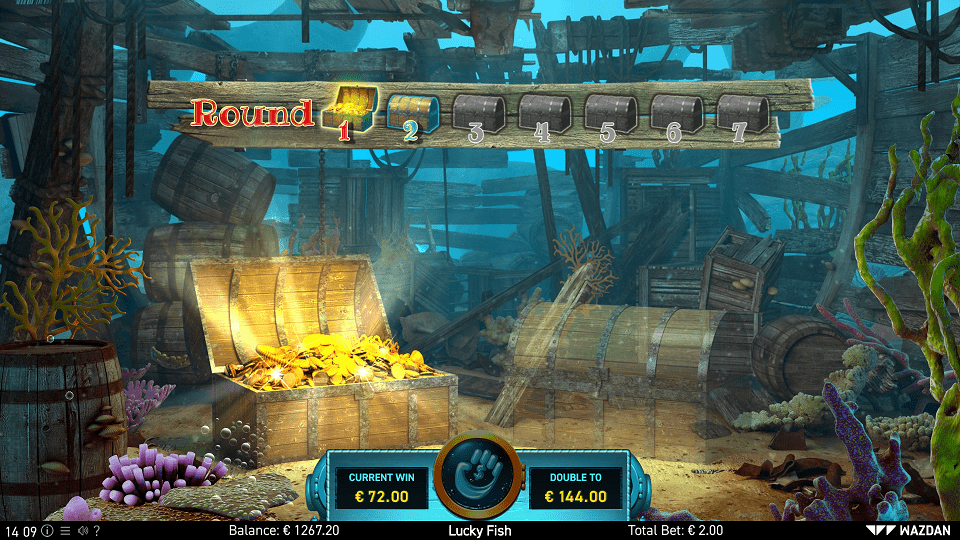 Who can find the sunken treasure? Those lucky enough to do so get the incredible opportunity to double their wins with the Unique Gamble Feature! 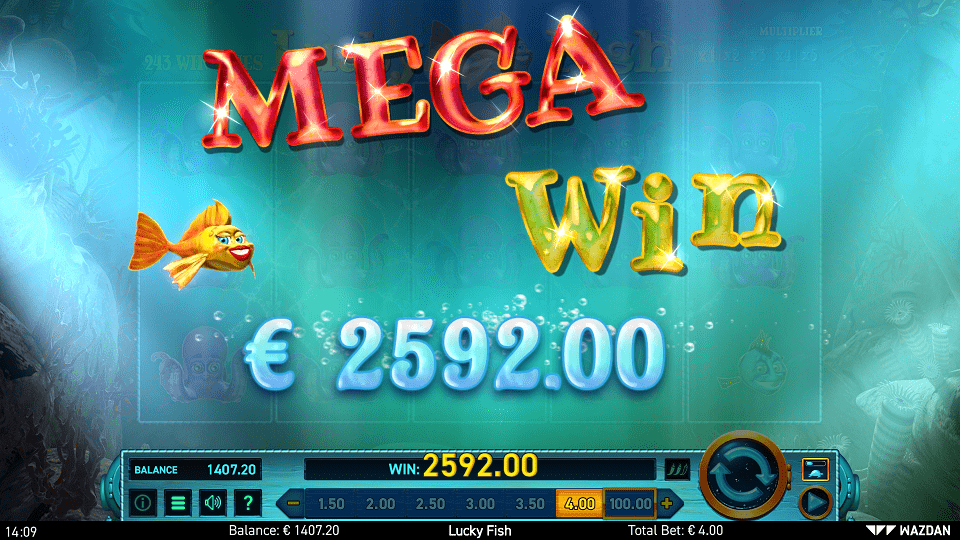 Find a mysterious sunken treasure deep inside the ocean and win up to x350 with the help of friendly sea creatures – they will bring you luck! 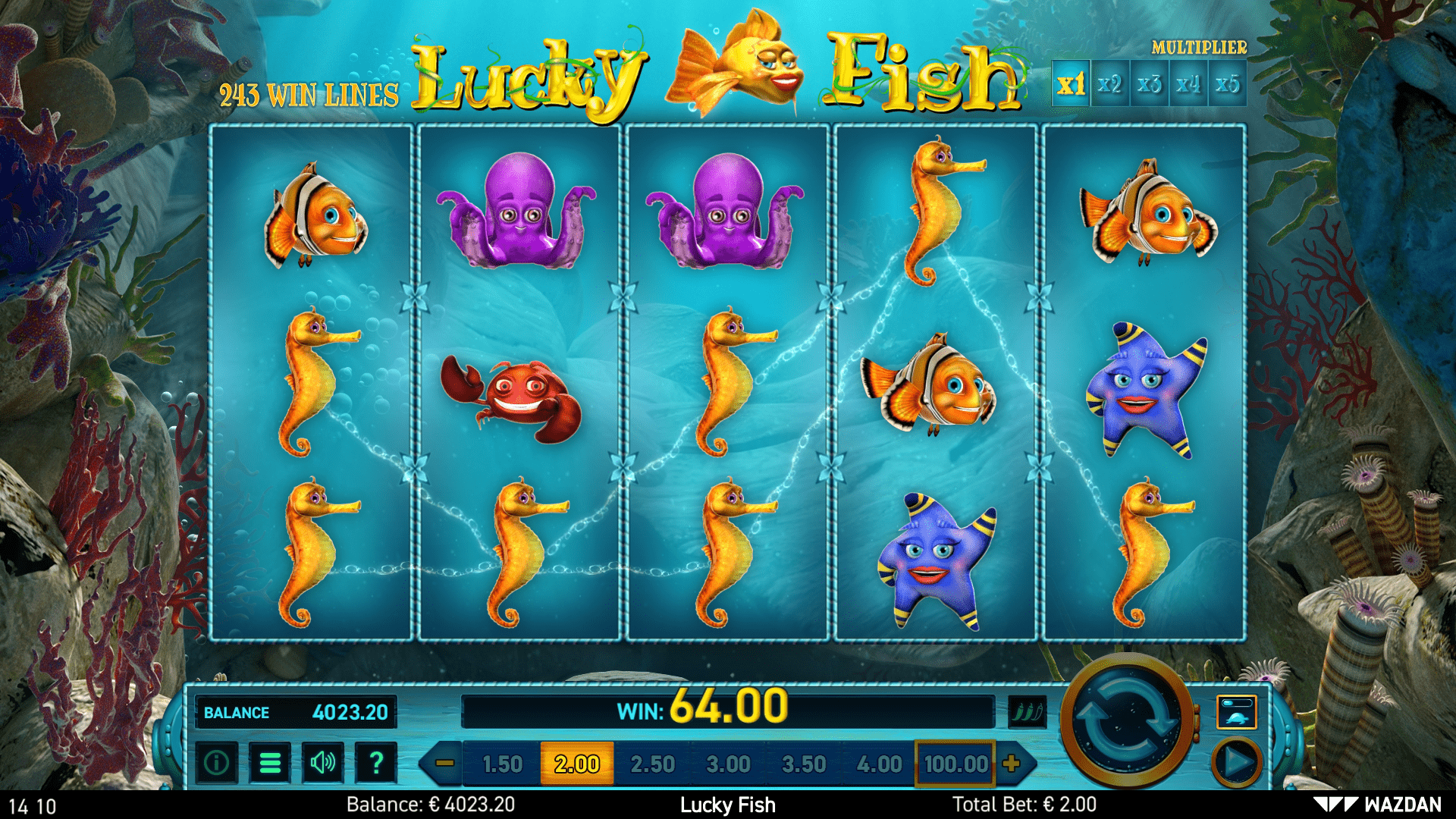 Enjoyed your swim with Lucky Fish? The little fella would like to introduce to you a bunch of his friends featured in various other adventure-packed ocean-themed online slots. Meet Capitan Shark™ and gain his favour to reach his treasures, take a trip to a tropical island with Beauty Fruity™, get ready for a wild party with Beach Party or Hot Party Deluxe or do your best to save a shipwreck survivor in Hungry Shark.